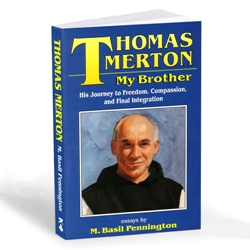 This unique volume contains not only a wealth of information about Thomas Merton, but also many insights that come from one who lived the life Merton lived. "One rarely writes a formal biography of one's brother," says Pennington (1931 – 2005). "Rather, memories are shared, vignettes are drawn." Paperback, 207 pgs.

"A fine source for the analysis of Merton's writing and thought in the context of monasticism."
---Professor Bonnie Thurston (past President of the International Thomas Merton Society)