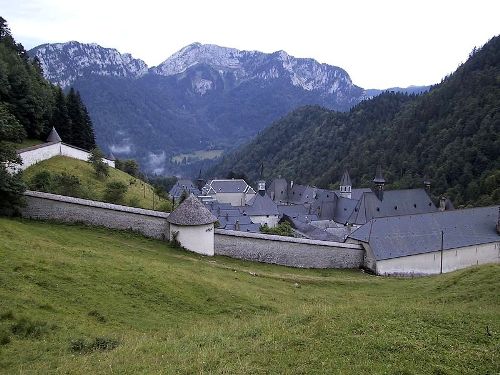 La Grande Chartreuse is the original monastery of the Carthusian order. It was founded by St. Bruno of Cologne in 1084 in the Chartreuse Mountains, near the city of Grenoble in France. The name Carthusian is derived from "Chartreuse," as is the word charterhouse (the English name for a Carthusian monastery).

A Carthusian monastery is sometimes described, paradoxically, as a community of hermits. Each monk passes most of his life alone in his cell where he prays, works, takes his meals, and sleeps. During the course of the week, he leaves only three times a day for offices and communal mass. The order has its own Rule, called the Statutes, rather than the Rule of St Benedict.

The Carthusians' work is not of a pastoral or missionary nature. As far as possible, they have no contact with the outside world. Their focus is their life of prayer, which they undertake on behalf of the whole Church and the human race.

Since the 18th century La Grande Chartreuse has been supported by sales of their eponymous liqueur, made from an ancient formula of some 130 herbs, plants, roots and leaves, which is known to only two monks at any time.
Write a Review