Father's Day is June 19th! Shop FATHER'S DAY for our complete selection of gifts.
Home/Beer / Trappist Beer/Orval Trappist Ale/Orval Trappist Ale 11.2 oz
Orval Trappist Ale (ABV 6.9%) is often referred to as the Queen of Trappists. Its color is cloudy, light sunset-orange with a large, foamy head. Aroma is complex with fruit, hops, leather and spices. Its distinctive taste, with profound hop bitterness and a long dry finish, is a result of the use of dry hopping and Brettanomyces (a local wild yeast) during maturation. Can be cellared up to five years, gaining in nuance. 11.2 oz bottle. 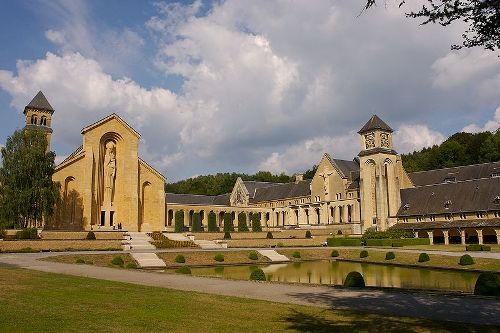 Orval Abbey is a Cistercian monastery founded in 1132 in the Gaume region of Belgium. The abbey is well-known for its history and spiritual life but also for its production of Trappist beer and cheese. There is evidence that there was already a chapel on the site in the 10th century. In the 12th century a group of Cistercian monks from Trois-Fontaines Abbey in Champagne arrived, and joined with the Canons Regular who had preceded them to form a single community within the Cistercian Order under the first abbot, Constantin.

Over the succeeding centuries, fires, wars and pillaging occurred, interspersed with periods of stability. In the 17th century, the abbey converted to the Trappist branch of the Cistercian order, but reverted back to the Rule of the main order in around 1785. In 1793, during the French Revolution, the abbey was completely burnt down by French forces in retaliation for the hospitality it had provided to Austrian troops, and the community dispersed.

In 1887 the land and ruins were acquired by the Harenne family, who donated the property to the Cistercian order in 1926 so that monastic life could resume on the site. A new monastery was constructed, and in 1935 Orval regained the rank of abbey. The ruins of the medieval buildings remain on the site and are available to view.

A legend of the abbey's foundation explains the name '"Orval" and the abbey's coat of arms, which shows a trout and a ring: the widowed Mathilda of Tuscany was visiting the site when she lost her wedding ring in a spring. When she prayed for its return, a trout appeared on the surface of the water with the ring in its mouth. She exclaimed "Truly this place is a Val d'Or" (valley of gold), from which the name "Orval" is derived, and in gratitude funded the building of the monastery. The spring still supplies water to the monastery and its brewery.

Throughout the long history of Orval, there has probably always been a brewery at the monastery. Various facts corroborate this idea: topographical references on old drawings; a detailed description of production left by a Franciscan visitor three hundred years ago; an area called the "hop-field" very close to the monastery. To brew beer was customary in areas little-suited to vine-growing. Beer was first and foremost considered for its nourishing properties: it was called "liquid bread". The last of the brewers to be a monk was Brother Pierre, up until the 1793 fire.

In 1931 the present brewery was built, employing lay people and intended to provide a source of funds for the monastery reconstruction. It was designed by Henry Vaes, who also designed the distinctive Orval beer glass. Orval was the first Trappist beer to be sold nationally around Belgium. Its very distinctive taste is largely attributed to two parts of the brewing process: the use of dry hopping, in which large meshed bags of hops infuse the beer during the three week maturation period, and the use of Brettanomyces (a local wild yeast) during this same maturation.