Journey in a Holy Land (hardcover) 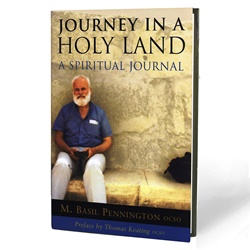 JOURNEY IN A HOLY LAND
A Spiritual Journal
By M. Basil Pennington
Preface by Thomas Keating

Join the Trappist monk and abbot (1931 – 2005) as he travels to Nazareth and Cana, through desert shrines such as Jacob's Well and the mystical Qumran, to Mount Sinai and the holy city of Jerusalem, and finally, to Bethlehem. Those familiar with the Holy Land will delight in his apt descriptions. Devotional readers will appreciate his meditations on The Cross, The Tomb, The Upper Room, The Temple, Stations of the Cross, and The Nativity. B&W photos. Hardcover, 178 pages.

Fr. Basil Pennington, OCSO (1931 – 2005) was a Trappist monk, priest and abbot. He was a leading Roman Catholic spiritual writer, speaker and teacher who published over 60 books. Fr. Basil is best known as a teacher of Centering Prayer. He, together with Spencer monks Fr. William Meninger and Dom Thomas Keating, rediscovered this traditional method of prayer in the mid-1970s and packaged it in a simple format that has made contemplative prayer accessible to many thousands of Christians around the world. Centering Prayer draws especially on the fourteenth-century Christian classic, The Cloud of Unknowing, and relies on divine grace, not on the meditator's own effort. Fr. Basil's outgoing personality and unrelenting religious search led him to befriend rabbis of his native New York, Eastern Orthodox monks of Mount Athos, Hindu holy men of India, and many other non-Christians, as well as Christians of all denominations.

Fr. Basil entered the Order of Cistercians of the Strict Observance at St. Joseph's Abbey in June 1951. He served as professor of Theology, Canon Law and Spirituality, and from 1978 as Vocation Director. He served also at the Trappist monastery on Lantao, Hong Kong and at Assumption Abbey in Ava, Missouri; he was elected Abbot of the Monastery of the Holy Spirit in Conyers, Georgia. He returned to St. Joseph's Abbey after retiring in 2002. He died on June 3, 2005 from injuries sustained in a car accident.