Thomas Merton: I Have Seen (paperback) 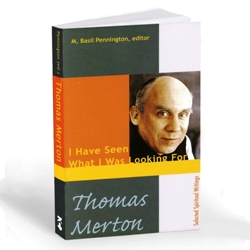 THOMAS MERTON: I
HAVE SEEN WHAT
I WAS LOOKING FOR
(paperback)

An intimate and personal look at Merton's life and writings by his fellow Trappist and friend, Father Basil Pennington (1931 – 2005).

"An engaging approach for new readers and a refreshing review for longtime Merton fans, this carefully planned anthology by a fellow monk and friend abounds with helpful insights into the life and writings of the most influential spiritual mentor of our time."
-- William H. Shannon (author of Silent Lamp: The Thomas Merton Story)