Click to order Trappist Ale from Spencer - The first Trappist brewery in the U.S.A.
Home/CDs & DVDs/Christmas Music/Christ is Born: Orthodox Hymns (CD)
To hear samples from this CD on your Windows Media Player, just click on SAMPLE. 1. Bells (SAMPLE) 2. O House of Ephratha (SAMPLE) 3. Troparion of the Eve of the Nativity (SAMPLE) 4. Kontakion of the Forefeast of the Nativity (SAMPLE) 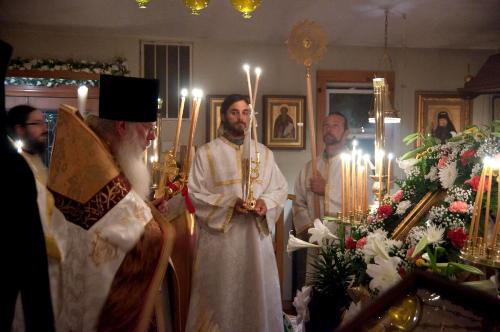 The Hermitage of the Holy Cross is an English speaking monastery under the jurisdiction of the Russian Orthodox Church Abroad and is a dependency of Holy Trinity Monastery in Jordanville, New York. The monks support themselves by manufacturing hand-rolled incense in the ancient Athonite tradition and through hand-painted icons, homemade soap, wooden icon shelves, analogions (prayer desks) and other liturgical items and products.

Holy Cross Monastery was founded in September 1986 by Hieromonk Kallistos in House Springs, Missouri. The Hermitage remained in the Missouri area for the next 14 years. An offer of land was made to the Hermitage and with the blessings of the monastery's Abbot, Archbishop Laurus of Holy Trinity Monastery and the monastery's spiritual father, Igumen George, the brotherhood decided to move the monastery to West Virginia in 2000.
Write a Review