As We Knew Him (hardcover) 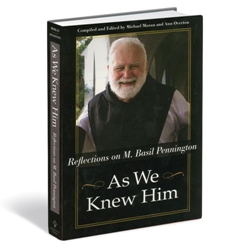 AS WE KNEW HIM
Reflections on M. Basil Pennington

M. Basil Pennington (1931 – 2005) lived more than 50 years as a Cistercian monk and priest, called to a life of solitude and silence, prayer and contemplation. During that half century, he also traveled the world teaching, wrote dozens of books, and was a founder of the Centering Prayer movement and several national and international organizations. Who was this dynamic and deeply spiritual man? Contributors include Thomas Keating, Laurence Freeman, E. Glenn Hinson, Werner Erhard, members of Basil's immediate family, and many others. As We Knew Him also includes a previously unpublished autobiographical reflection by M. Basil Pennington himself.

As We Knew Him is the compelling story of one of the great spiritual leaders of the last century. Family, friends and colleagues who knew Basil and worked alongside him share their experiences of a simple yet charismatic man of faith and the difference he made in millions of lives. Through their memories, you will encounter an unforgettable presence whose contributions will live on far beyond his years. Hardcover, 207 pages.

Fr. Basil Pennington, OCSO (1931 – 2005) was a Trappist monk, priest and abbot. He was a leading Roman Catholic spiritual writer, speaker and teacher who published over 60 books. Fr. Basil is best known as a teacher of Centering Prayer. He, together with Spencer monks Fr. William Meninger and Dom Thomas Keating, rediscovered this traditional method of prayer in the mid-1970s and packaged it in a simple format that has made contemplative prayer accessible to many thousands of Christians around the world. Centering Prayer draws especially on the fourteenth-century Christian classic, The Cloud of Unknowing, and relies on divine grace, not on the meditator's own effort. Fr. Basil's outgoing personality and unrelenting religious search led him to befriend rabbis of his native New York, Eastern Orthodox monks of Mount Athos, Hindu holy men of India, and many other non-Christians, as well as Christians of all denominations.

Fr. Basil entered the Order of Cistercians of the Strict Observance at St. Joseph's Abbey in June 1951. He served as professor of Theology, Canon Law and Spirituality, and from 1978 as Vocation Director. He served also at the Trappist monastery on Lantao, Hong Kong and at Assumption Abbey in Ava, Missouri; he was elected Abbot of the Monastery of the Holy Spirit in Conyers, Georgia. He returned to St. Joseph's Abbey after retiring in 2002. He died on June 3, 2005 from injuries sustained in a car accident.