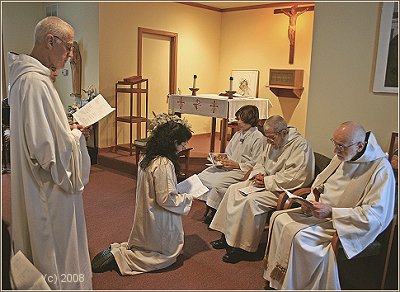 Sister Marie Claire of New Helfta was born Minhhang K. Huynh in Saigon, Vietnam and came to America in 1985. She lives a monastic life consecrated to God under a solemn vow of chastity inspired by St. Gertrude, a nun of the 13th century German Cistercian monastery of Helfta.

The New Helfta Atelier is her art studio in which she paints icons and other religious subjects. She also has gathered a group of single Catholic women (virgins, divorced women and widows) as a spiritual community of lay sisters who live on their own but meet regularly to pray the Liturgy of the Hours, share Sunday Gospel readings and discuss spiritual matters. Abbot John Eudes Bamberger of Genesee Abbey guides them in this spiritual life.

The monks are dedicated to the worship of God in a hidden life within the monastery following the Rule of St. Benedict. The monastic community supports itself by the common work of baking a variety of breads, cakes and fruitcake. In addition, the brothers help out on the farm and with cooking, laundry, cleaning, hospitality, formation of new members, and care of the sick and elderly of the community. The community is cloistered and has no outside ministry. Guests are received for quiet, private retreats at the retreat house.
Write a Review